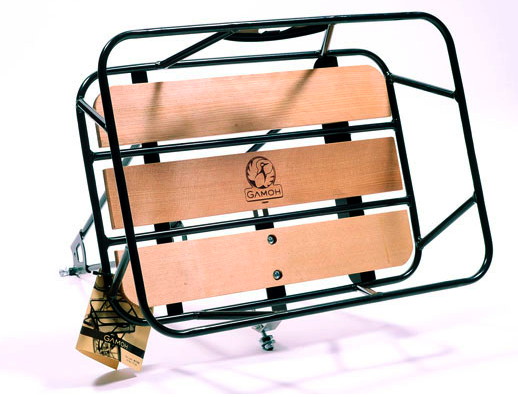 This past summer (after eyeing Globe's Live bicycle) I felt the need for a front rack upgrade... and went for the GAMOH by Minoura.  Actually, we ended up with two of them (for two different bikes). Having used the GAMOH for a few months now here is a review and warning*:

FABULOUSNESS...
The rack is large (measuring at 18"x12.5"x4.25") and somewhat intimidating bumper - perfect for maneuvering NYC streets. The framing is super strong chromoly steel tubing with a powder coating that has yet to chip, dent, or show any wear. A good urban carry-all with a weight limit of 40lbs - while Ben's Cycles recommends no more then 25lbs. It is shallow enough so you can strap on all sorts of oddly shaped items. I had initially been looking for a large cargo rack which did not connect to the handlebars. The GAMOH's three point attachment (to the fork eyelets and fork crown/front breaks) makes for a nice and clean look. And how I adore the wood ♥ paneling (though since I most often lock up my commuter outdoors it didn't take long before I cleaned off the boards and applied a few new coats of Tung Oil). Though this really to be expected maintenance. And, indeed, that little cut out in the front is a bottle opener.

NOT SO FABULOUS...
This baby weighs in at 5+ lbs/2550 grams - which adds up when you commute on a steel beater though not a deal breaker for me in this instance. The biggest issues I have had is with the top mounting bracket* which connects to your front brake. Firstly, the rack comes with two steel brackets (which you are intended to just use the one which works for you) - well NEITHER were angled to accommodate the two bikes which meant the bracket had to be jury rigged and bent to fit: 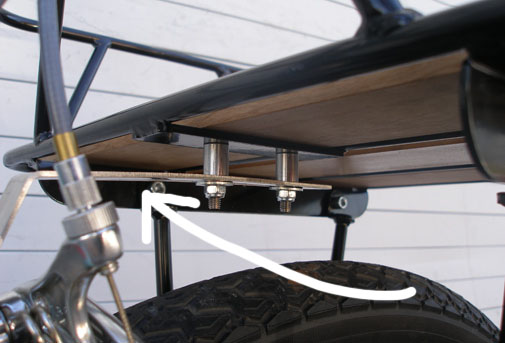 via Rivendell
So all as good and dandy until riding down a decent hill - after using it for a month - I suddenly glanced down and watched my bags which were strapped to the rack move in front/away from me  ending up with them scrapping along the concrete ***THE BRACKET HAD BROKEN IN HALF*** yeah, pretty dangerous (could have actually been a catapulting situation). Naturally you could tell yourself "you totally just created that weak spot by bending it!"and while true the real issue is the quality of steel used for the bracket is just not adequate. Perhaps I was overloading - thought I do tend to use a bungee cord attached the frame and loop it around the stem - similar the Rivendell's advice:

I recently spotted a fellow commuter with the same GAMOH and it turns out he had the same issue with neither bracket fitting and after trying a some self bending options went to a hardware store and bought and customized a totally new (stronger) steel connector. I knew I wasn't alone.

As mentioned above there ARE some great features with the rack but hope you find this post is helpful. And here's my carrier with bungee cords in FULL effect... 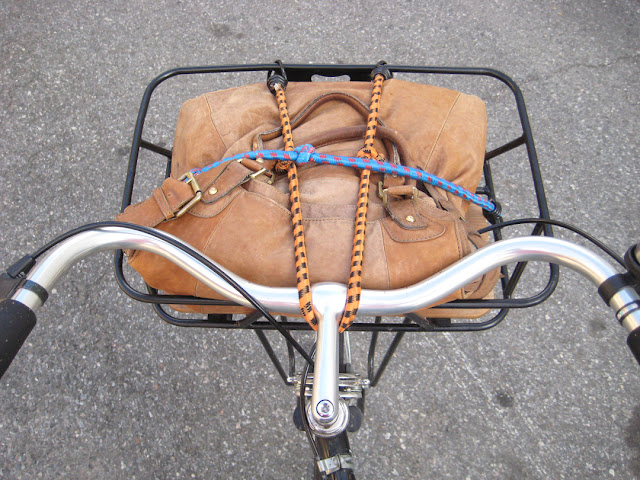 Email ThisBlogThis!Share to TwitterShare to FacebookShare to Pinterest
Labels: Japan, practical things for your bike, product review, to carry things on your bike, wood 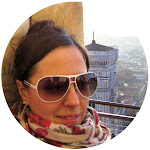 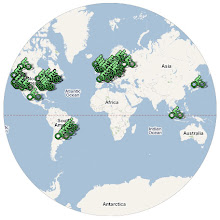